This month I’ve been working on the June edition of the Shropshire Family History Society Journal. I managed to get it completed in time to meet my self-imposed deadline, which pleased me.

So far there have been no more developments on the Wilkinson family album that I wrote about last month. I’d love to help Steffan by getting in touch with a descendant of the Wilkinson family, but I guess the odds are against it. Anyway, I’ve sent the image of the silhouette of David Price (1774-1840) to all of his modern descendants that I know about, and I’m sure they will be pleased to have it.

In the time I had available for research this month I had another attempt at discovering more about our Rand forebears – particularly the half siblings of John Bankes, Citizen & Haberdasher of London (c1650-1719). New material is becoming available oinline all the time, so it is always worth carrying out searches on people who you researched some time previously.In this case I reverted to John Rand, the Barber Surgeon, who we believe was a nephew of Bankes, born about 1684. He crops up in a number of legal documents that deal with Bankes’ bequests, and we have long ago found his marriage – to Sarah Haynes in 1707 – and his Freedom record of 1705. All this ties together beautifully, but then we hit a problem.

On his apprenticeship document John was said to be the son of Samuel Rand of Chichester, deceased. A search on the internet led me to the parish register indexes that have been prepared by the Sussex Family History Group. I invested a few precious postage stamps in writing to the custodians of these separate indexes and received replies in a very few days indeed, for which I thank them. However, all the replies told me that these searches had not found a Samuel Rand in Chichester. Indeed, I was told, Rand is a rare name in Sussex, and there were very few people of that surname in the records.

So I have drawn another blank. maybe this Samuel Rand was only in Chichester for a short while – not long enough to appear in the parish registers. Possibly, but it seems a bit odd for him to be referred to as “of Chichester” if he was not from that town. More investigation was obviously needed, so I had a look for a Will for the said Samuel,  searching the PCC records online on the website of The National Archives. No trace of Samuel there, either.

When I searched the London parish registers I found a son of John Rand and Sarah, baptised and buried inside a few weeks in 1710. Yes, you guessed – this son’s name was Samuel Rand. This certainly leads me to believe that there is little doubt that the man we seek  was named Samuel, but I am at a loss as to how to go about tracing him in the records.

Any suggestions will be gratefully received!

I’ve also been looking into Elizabeth (Rand) Hopkins, Bankes’ half sister who died in London in 1728. She had a son named Edmund Hopkins, but Edmund’s father had died before Bankes made his will in 1716. We do not know the name of Elizabeth’s spouse, but in my recent search I found what could be a relevant entry – the 1687 marriage in London of Benjamin Hopkins and Elizabeth  Rand. Now I need to find a baptism of Edmund,son of Benjamin & Elizabeth probably c1700, and I think we will be on to something. Can I be that lucky? Maybe, some day. In the meantime I have found a marriage bond for Edmund dated 1721. I had known that his bride was named Phillipa. I now know that her maiden name was Clarke.

Thus you can see that, but by bit, I am managing to piece together little bits of the puzzle, but the really big prize still eludes me.

On the last weekend in April we went to stay in a lovely Bed & Breakfast at Llandow, about 10 miles west of cardiff, named Sheepleys.  The accommodation and hospitality was first class. The weekend included a visit to the New Theatre, Cardiff, a lovely theatre which is 100 years old, to see Northern Ballet perform Beauty and the Beast – absolutely stunning! We really enjoyed that. Alas, the weather all weekend was poor – a very cold wind blew through the streets of Cardiff on Saturday, and on Sunday we awoke to a really awful storm. The wind was blowing a gale, and the rain was lashing down as we made our way home a few hours earlier than we had planned. As we drove away from Sheepleys a tree fell across the road literally about 10 yards in front of our car. This blocked the road, but if we had been a few seconds earlier leaving we would have been under it. Lucky, or what?

As we go around the country I always look at the Bankes pedigree to see whether any Bankes descendants lived in the area we are visiting. Sure enough, I found that a Rand descendant on the Welsh branch of the pedigree – Rev David Bankes Williams (18-1938) – was vicar at Llantrithyd near Cowbridge in Glamorgan for a number of years from 1926, having previously been Vicar at Cwmavon, Port Talbot 1890-1926. Naturally, we had to visit the church. 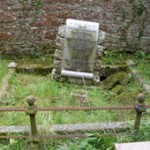 This small and fairly isolated village was quite easy to find, and we soon located David’s grave. You will not be surprised to learn that his status as the parish vicar entitled him to be buried near the door to the church. Seeing the grave enabled us to add the death date of David’s spouse to the pedigree, as well as a son we had not previously traced – Gildas (1905-1932). That is the value of visiting the graves of your forebears, they often enable you to add previously unknown detail to your family tree. Out came my trusty little digital camera, and the photo you see on this page was the result.

It was sad to observe the rundown appearance of the grave. Evidently nobody has maintained it for some years which happens very often in my experience. Anyway, we have seen from Crockfords Directory entries that David and family lived in the Vicarage at Llantrithyd, and we were easily able to find this building, just across the road from the church. We don’t know who lives there now, but we took the opportunity of taking a couple of photos of this very fine building.

Llantrithyd is, and seemingly always was, a very small community, with a small church, so it was a bit of a surprise to see this really quite impressive vicarage. The vicar obviously lived in some style.