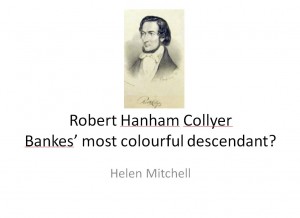 This page contains the text of the slides that were used by Helen Mitchell in presenting her talk at the Bankes Descendants’ Reunion at Coulsdon on 18th June 2011. Some content has been added to improve  the flow of the narrative.

Index and Links to Sections.

Acknowledgement:
The image at the top of this page is a lithograph of a young Robert Hanham Collyer, and is reproduced on this website by courtesy of the American Antiquarian Society, Worcester, MA, USA.