On 18th June 2011 at Coulsdon, we held what was, so far as we know, the first Reunion of the Descendants of the half-siblings of John Bankes.  The event was held at Netherene Community Amateur Sports Club at Coulsdon, and although it cannot truly be said that the sun shone on us, it is fair to say that all the 43 Bankes descendants who came from far and wide to attend enjoyed a super day. 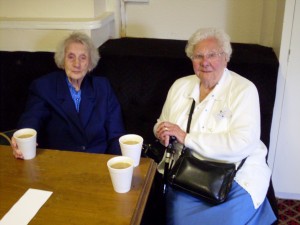 We were thoroughly delighted to welcome all our guests, but pride of place went to our two nonagenarian sisters – Mary Fletcher and Emma Cootes, who were undoubted stars of the day.

All such events need an ice breaker, and our ice breaker was a really super game of Bankes Bingo. This game was devised especially for the event, and followed the usual procedures associated with Bingo. However, there was a difference. Instead of calling out numbers, our caller gave out the names of certain people who feature on the Bankes Pedigree, and if a player had that name on his or her card it was covered up. For each of the names that were announced in the course of the game, a brief summary of what we know about them was announced, making this at once informative and enjoyable!

The winner of the prize for this game was Ben Rolls, a descendant of Mary Mitchell, half sister to Bankes.

You can see Helen’s notes about the Bankes descendants who were featured in this game by following this link. 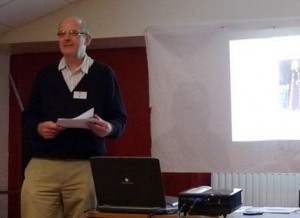 Our morning talk was by Geoff Culshaw, who outlined what we know – and what we do not know – about John Bankes, Citizen & Haberdasher of London (c 1650-1719). In spite of the fact that over the past 24 years we have discovered a tremendous amount of information about our benefactor, there is still a very large gap in our research – we don’t know who his parents were, or indeed, the parents of his half siblings, who actually were our forebears. The search continues!

You can see Geoff’s notes for his talk by following this link:

There was quite a bit of time available for mingling – for the making of new acquaintances and the renewal of old ones, and for studying the enormous Bankes Pedigree chart, which spread around three walls of quite a large room. Much time was spent by people finding their lines on the tree, and many people were good enough to add extra detail to the chat, to enable us to update our records or correct the odd error.

We all enjoyed a most delicious buffet lunch, and then it was time for Helen’s talk on one of our favourite Bankes descendants – Robert Hanham Collyer (1814-abt 1891). Those of you who have been following my blog, and who have studied the Robert Hanham Collyer Chronology on this website, will be aware of this most colourful character, who was by turns a medical doctor, a phrenologist, a showman, an inventor, a bigamist, and much more besides. Helen outlined what we know of his life in a most amusing style, and as well as learning a lot about this man, our guests were thoroughly entertained by her talk.

You can see Helen’s notes for her talk by following this link:

The day was rounded off by another period of mingling, then it was time to say goodbye. The comments we received from attendees after the event indicate that everybody had a good time and although some people had travelled a very long way to attend, they all thought the effort well worthwhile. We certainly enjoyed the day.

Click here to see the photos of the day

A big thankyou to Dot & Bob Eason, who made the venue available to us and also worked very hard to make the event a success. Without their generosity it would not have been possible for us to hold the reunion.

A big thankyou, also, to all the attendees. We really appreciated the effort you made to come, and enjoyed the opportunity to meet you all.